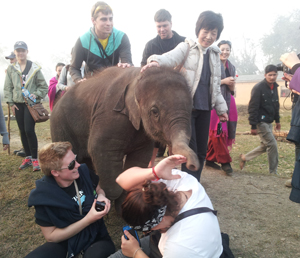 Please Choose the suitable package based on time availability. 2 nights 3 days package is the most sold one.

The above rate includes 13% government tax & 10% service charges. The accommodation are on twin sharing basis.

Also known as Royal Chitwan National Park, this park was established in 1975 and covers a area of 932 square kilometers. The park is located in subtropical inner terai lowlands of south central Nepal in Chitwan. The National park is enlisted in the World Heritage site in 1984. The altitude in this park varies from 100m in river valleys to 815m in Churia. The park is bounded by Narayani- Rapti river system which acts as natural boundary and separates it from human settlement.

The Chitwan National Park is well known in the world for its success in preserving and being home to more than 700 species of wildlife, 113 species of fish, 43 species of mammals and many more. This park is also inhabited by famous King Cobra and Rock Python and other 17 species of snakes. Other famous and endangered animals found in this park include Royal Bengal Tiger, one horned Rhino, Hispid Hares, and Rhesus Monkeys. This park is also heaven for the bird watchers as they can observe 848 species of birds which includes two third of globally threatened birds.

The National Park can be observed on Jeep or Elephant safari or on foot. Boating/ canoeing also provide the unique way of observing the habitat of park. Elephant safari provides one with very entertaining life time experience of jungle safari. It is around 45 minutes ride through jungle which allows one to have close look on natural habitat of different animals like deer, peacock and many more wild lives. This ride passes through the place occupied by the endangered one-horned rhino which allows you to be well acquainted and have close look of rhino. Many of the visitors have also fortune of getting encountered with famous Royal Bengal Tiger. The other animals which can be observed include striped hyenas, foxes, wild dogs and Kalij, Leopards and many more.

There is also another way to visit the jungle which includes jungle safari which follows through the confined trail of the jeep in the jeep while jungle walk allows you to have close-up opportunities to view animals. Moreover dugout canoeing offers view of water birds in the Rapti River and other animals like gharials crocodiles. The Elephant breeding center and Gharial and Turtle Conservation breeding centers are also one of the most visit places.