More People in Kavresthali are found obese and Hypertensive 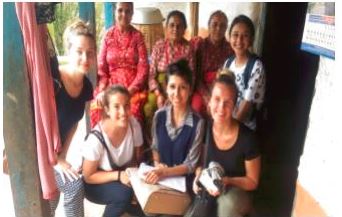 A Cardio Vascular Disease Prevention campaign conducted at Kavresthali by VIN volunteers has revealed that about 45% of people among 66 are overweight. In total it was included 66 people above the age of 30 so far 5. 23% of people were between 30 to 39 years old, 14% were between 40 to 49 years old, 10% were between 50 to 59 years old and 19% were 60 years or older. The results has shown that of the included population 49.2% had a normal weight (BMI: 18-25). Of the remaining population 6.2% of the people were underweight (BMI: < 18) and 44.6% of the people were overweight (BMI: > 25). In total five people were obese. Thirteen people had a systolic blood pressure above 140 mmHg and therefore can be classified as hypertensive patients. It is also calculated the mean blood pressure of the population, separated into four age groups.

Volunteers from VIN, Sabina, Rushma, Marjie and Laura went to Kavresthali community for Cardio vascular disease prevention campaign from 5th of July to 11th July. They had recently gone to four villages, namely Padamsal, Vedigot, Lamichhane gaun and Thati. They mainly focused on marginalized group of people over the age group of 30. They have assessed 66 community people among which there were 26 male and 40 female. They have a wonderful experience in the community. They feel difficult keeping the people motivated to listen to the presentation about high blood pressure. People would come by to have their height, weight and blood pressure measured and would leave again before they present the posters. They communicate with locals by using non verbal communication and acting out some of the complications or symptoms. The group found that the campaign resulted to have a positive outlook to the community people. They were happy and excited to be assessed by this project. The people were cooperative and interacted a lot with them which created a friendly environment for the discussion. This project helped people gain knowledge about cardiovascular diseases, it’s symptoms, risk factors, complications and prevention. To sum up, they became well aware about the disease condition and were ready to abide by the suggestions to lead a healthy lifestyle.