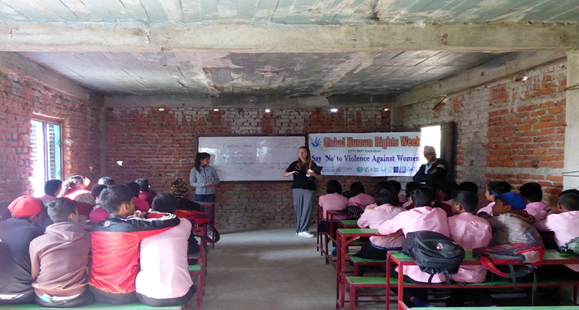 I came here to focus on women: ‘women’s empowerment!’ I proudly told my friends and family as I clicked my heels and boarded a plane for two months in Nepal. I was off to go and make some tangible contribution (rather than pointlessly pontificating behind a desk in London) towards a global future where women will, one day, be equal partners. That I’m writing this the day after Donald Trump has been named the President-elect of a global super power I hope, perhaps naively, will not set us back too much on that path.

The program offered by VIN promised me the chance to work with women to build income generation skills, give them the means to take loans, and make savings of their own to grow a little more independence from their husbands and confidence in themselves. And, crucially, set an example to their daughters that the lives their mothers have lead in a heavily patriarchal society, is not their only option too. We would also be conducting a research project to measure the impact VIN has had on a community they are about to leave (Jitphurphedi), and prepare proposals for improvement to a new program in a new community (Kabresthali).

These were my expectations. For various administrative reasons I won’t go into here, my reality was quite different, but has left no less of an indelible mark on me – it’s one I wouldn’t change in the slightest.

I spent much of my time here giving life skills classes to women in rural communities: assertive communication, stress management, domestic violence awareness, women’s rights, amongst others. These were some of the final classes to this community, and we then performed a survey of 25% of the 700 women who had been on the receiving end of VIN’s efforts for the last 7 or so years. It was amazing, and though it’s a cliché to say, humbling to meet and work with the women here, personally and emotionally quite challenging to prepare and give a week’s worth of workshops on domestic violence awareness and prevention, and highly insightful to carry out the impact survey.

For the purposes of brevity, the one final point I will make is this: whilst VIN’s efforts have been valuable, and they have made a positive impact on the lives of women in Jitphurphedi, my subjective opinion on the basis of my time here, combined with the objective analysis of the impact study, bring me to one conclusion: involve men. Educate men on these same issues. There is a finite amount of good and change you can bring about by telling women their rights, that domestic violence is wrong. My challenge to VIN is to create a program which actively brings men into the conversation, and focusses on educating boys too.

To future volunteers: you need to be proactive, passionate and bring an extra suitcase of initiative to work with VIN. The work they do in Nepal is indispensable, but relies heavily on skilled volunteers. On the current women’s empowerment program at least, you will have the opportunity to shape your time here and make a real and worthwhile contribution.